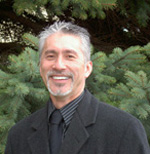 In the 28 years of working for Fairchild Air Force Base, Chris Corativo has always used a commute alternative. For the past three years, Chris has been vanpooling and is also the primary driver. With a 24-mile one way trip, he stops at two area park and ride lots to pick up employees. Chris has always viewed using commute alternatives as the "right thing to do."
Chris continually promotes CTR to his employees, especially the vanpools. His success in recruiting employees to vanpool was evident when he got his third vanpool on the road this year. Chris even convinced his boss to vanpool and he is now a staunch supporter. "It works out great, because we get a lot of work accomplished during our ride to and from work." Chris smiled.
Other benefits Chris enjoys are less miles driven on his car, money savings and helping the environment by taking up to 15 cars off our roads each day during the work week. "Chris is a long-time, dedicated vanpooler and a huge advocate for our CTR program," proudly says Allison Burcham, Employee Transportation Coordinator for Fairchild Air Force Base. Way to Go Chris!