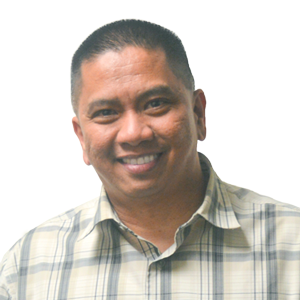 Felix is the Unit Program Coordinator for FAFB. He began vanpooling 7 years ago. He has a 46 mile round trip commute from the North side and typically vanpools 4x per week, as well as working a compressed work schedule.

Felix originally began vanpooling after a co-worker Mary Farver (previous MVC) encouraged him to give it a try. With only a 5 minute walk to the Hastings Park & Ride lot, he gets in a little exercise before jumping in the van. Felix helps his vanmates out by driving when the primary driver cannot. Most days Felix rides in the copilot seat and makes sure soothing music is playing for the driver and the other riders. He says that when people are relaxed and happy by vanpooling, they tend to vanpool more often.

Felix is always recruiting for his vanpool and encourages his fellow co-workers and other FAFB employees to use vanpools. His job allows him to tell new personnel and their amazing fully subsidized vanpool program.

The biggest obstacle for him is family emergencies, however he keeps a spare vehicle at work in to solve this problem.

Felix realizes how he’s helping the environment, however he also benefits as he only puts about 3,000 miles on his personal car per year. That’s ONE oil change per year!

ETC, Josh Potter, states “Felix is constantly promoting vanpooling. In the last year, he’s been personally responsible for recruiting 3 new vanpool riders for both his van as well as other vans at Fairchild. Felix is an enthusiastic supporter of the CTR program and models what it is be a MVC.