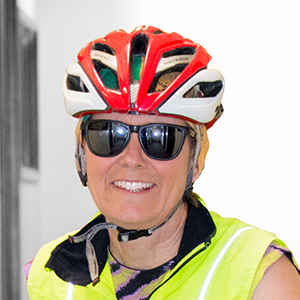 Rosemary has worked as an Administrative Law Judge for the Washington State Office of Administrative Hearings (OAH) for the past 7 years. During her time with OAH, she has used many types of commute alternatives including bicycling, teleworking, riding the bus and working a compressed work schedule.
When OAH was located in downtown Spokane, Rosemary began riding her bike. Her commute was a quick 1.5 miles and bicycling saved her money on both gas and parking fees. She also liked the fact that it minimized her carbon footprint and her bike ride into work gave her enjoyment.

After OAH moved to Spokane Valley, her 1.5 mile ride became a 15.5 mile bicycle ride. With a much longer commute, Rosemary makes the best of it by incorporating her love for biking. She still rides as often as she can and some days uses dynamic commuting and incorporates the bus into her commute. She’ll bicycle into work and then ride the bus home making good use of the bike rack on the front of the bus. Rosemary appreciates the fully subsidized transit pass provided by OAH and enjoys making good use of it.

Rosemary has always been known for her love of biking and has offered to be a bus or bike buddy for her co-workers. She considers herself a dedicated user of commute alternatives so much so that since October 2011, Rosemary has only driven alone to work 10 times!

OAH’s ETC, Angelica Garcia Avalos says, “The weather, distance and long bus waits have never been an obstacle for Rosemary.”