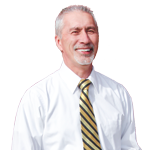 Christopher Corativo is a Project Manager for Design & Construction at Fairchild Air Force Base (FAFB). He has been vanpooling to work every day for the last 20 years. He has always been a fan and supporter of commute alternatives for the most basic reasons…. Economics & money!

Previously living in the Seattle area, he used mass transit to get to work. After moving to Spokane and settling on the north side, he found himself with a 24 mile one way commute. So he began carpooling.

In the early 90’s , FAFB began offering vanpool subsidies. Chris was responsible for getting one of the first vans on the road. Since then, his enthusiasm has helped encourage nearly 3 dozen new vanpool riders and added 3 new vans to the road. He’s also the primary driver & bookkeeper. “As far as I live from work, I’ve always thought it was the responsible thing to do – carpool or vanpool. Getting larger numbers of people to their destination without clogging up the roadways really makes sense” stated Chris.

If he were to drive alone to work, he would put nearly 900 miles on his car and spend approximately $500 a month in gas and maintenance.

ETC, Josh Potter says “When it comes to a valuable vanpooler, Chris it not only all-county, he is all-state and all-world … exceptionally deserving of recognition as “MVC”