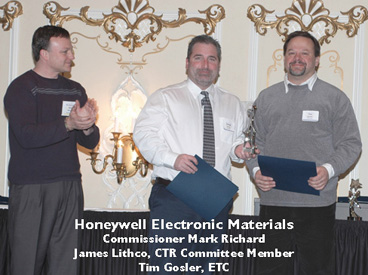 Honeywell Electronic Materials CTR committee including ETC, Tim Gossler received the coveted 2008 All Star Team Award at the Way to Go Awards Ceremony on January 29 at the Davenport Hotel.

Working 12 hour shifts, 7 days on and 7 days off, Tim is not in the office daily. With that in mind, he formed a CTR committee to help brainstorm ideas and get the CTR word out to employees.

The CTR committee is made up of five volunteers (listed below) who work diligently to promote commute alternatives to the over 400 employees at Honeywell. A majority of the members consistently "walk their talk" by using a commute alternative to work, which is an incredible advantage in planning and promoting commute trip reduction activities.

Committee members display posters for current promotions, maintain open communication with employees, assist new users in signing up on MyCommute.org and promote the CTR program by word of mouth. The presence of the committee and the consistent CTR messaging has dramatically increased participation at Honeywell. From January 2008 to November 2008 this worksite’s participants grew from 15 to 60! And, miles not driven increased from 1,700 to 7,400. During the April Travel Green campaign, Honeywell received the “Greenest” Award for their outstanding efforts and growth in their CTR program.

With strong management support and a $100 quarterly budget, the CTR committee at Honeywell promotes and gives away incentives each month to encourage participation. The goal of each committee member is to sign up one new user each week on MyCommute.org with an overall goal of achieving 100 participants by the end of 1st quarter 2009.

The overall enthusiasm for ridesharing at Honeywell has grown tremendously this year due to this committee’s commitment and dedication and it has directly impacted the success of their CTR program. Congratulations and Way to Go!

The following are the CTR committee members at Honeywell Electronic Materials.