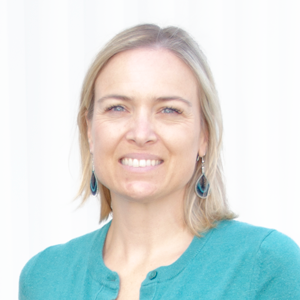 Summer Enser is the Quality Manager for INBC. She moved here 8 years ago from Las Vegas. Her husband began riding his bike to work while they were living in Las Vegas and would share with her his experiences of commuting by bike. Shortly after moving to Spokane, Summer began riding her bike to work. She wanted to be active, but needed to find a way to incorporate her 6-mile commute into her daily schedule.

Shortly after she began to ride to work, Summer purchased a new bike. A Surley Cross Check. She feels safer on that bike, as it’s built for some of our rougher roads. She loves that bike and mentioned if anyone ever broke into her house, the only thing she’d be upset over, is that if someone stole her bike!

Besides the winter weather, Summer doesn’t feel she has any challenges to overcome. With 4 children ranges in ages from 7-17, and all in different activities and schedules, Summer and her husband still make bicycle commuting work for them. Both Summer and her husband ride their bikes nearly every day. And, on days where they’re unable to ride, due to weather or schedules, they carpool.

Summer enjoys the biking community and the friendly waves cyclists give each other. She says it’s hard to feel like you’re a part of the community while you’re sitting in your car.
She says, “Any time I can start my day on my bike… it’s a good day!”

ETC, Shirly Mace, states “Summer encourages others to get started to try it and is willing to help them find local resources and plan routes to overcome that first hurdle to get started. She loves seeing other on bikes!”