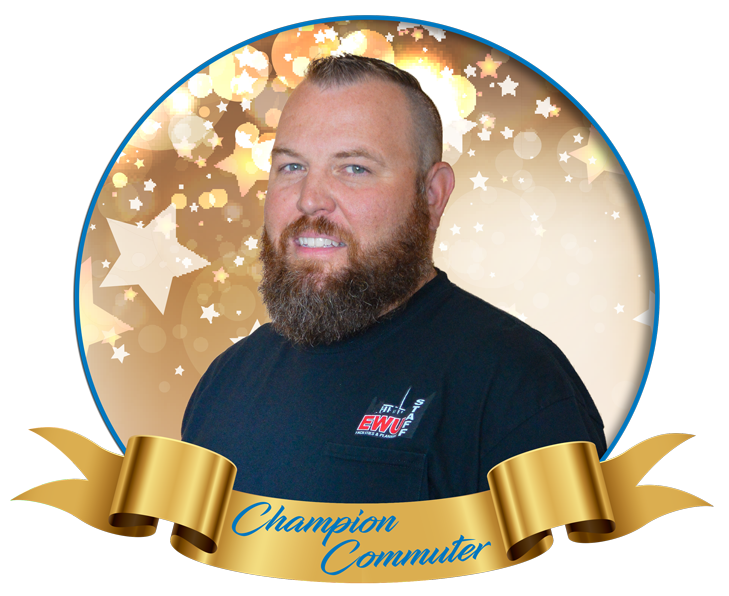 Scott Larson is a Maintenance Mechanic 3 for Eastern Washington University. Scott began vanpooling 2 years ago, shortly after being hired at EWU. With a 64-mile round trip commute, Scott had heard about vanpooling, started asking some questions and soon found out that vanpooling was free for EWU staff. So, he jumped on it!

Recently, Scott's schedule changed to an earlier start time. When that happened, instead of driving alone, he contacted others at EWU who had the same start/stop schedule and started another vanpool!

Scott doesn’t feel he has any challenges to overcome by vanpooling. But, when speaking to other potential vanpoolers, they feel they’ll lose their freedom by vanpooling. However, Scott lets them know, there is flexibility if you can’t ride every day and there are personal miles the driver can use the van, if needed. But the best thing about it is the fuel savings! Scott calculated that by vanpooling, the amount saved on his commute, equivalates to a $6 hour raise!

ETC, Michelle Rasmussen said, “Scott single-handedly is my mouthpiece for vanpool ridership here at EWU. I received another call just a month ago from people in a completely opposite end of the campus inquiring about how they could start one up. I assisted in contacting others who lived near them, and we got a fourth vanpool going thanks to Scott sharing boldly about how great it is! We went from 1 to 4 and appears that a 5th may be in the making”.