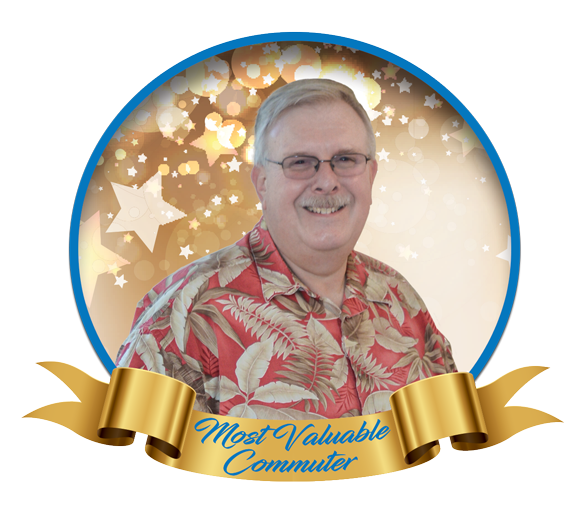 Robert is a Program Specialist in the Financial Aid office at SFCC. Robert has been using commute alternatives on and off for the last 20 years! With a nearly an 80-mile roundtrip commute from Rathdrum, ID, saving money is what initially got him started using commute alternatives. He began riding the bus, parking at the Liberty Lake Park & Ride, but then as his schedule and STA’s routes changed, it no longer worked for him.

In 2013 he began carpooling with a co-worker who also lived in Rathdrum, but 2 years later his carpool buddy left, and he was forced to drive alone again. But, Robert didn’t give up! Two years later, that same co-worker came back to SFCC, so her and Robert began carpooling again. They carpool nearly every day, unless one of them has a conflict.

Robert says they like having an extra pair of eyes on the road when they carpool… especially in bad winter weather, to help see any potential traffic problems, making sure everyone arrives safely.

With saving money being the reason why Robert “began” using commute alternatives, now he says it’s the friendship. He enjoys the conversations he has with his carpool buddy…. They’re humorous and make the commute fun! On days when he must drive alone, he doesn’t like it… “it’s a lonely commute when I drive by myself”, he says!

ETC, Mary McDaniel, states “Robert has been an enthusiastic supporter of commute alternatives at Spokane Falls Community College. While enthusiasm for commuting may come and go, Robert has kept the commuting spirit alive”.