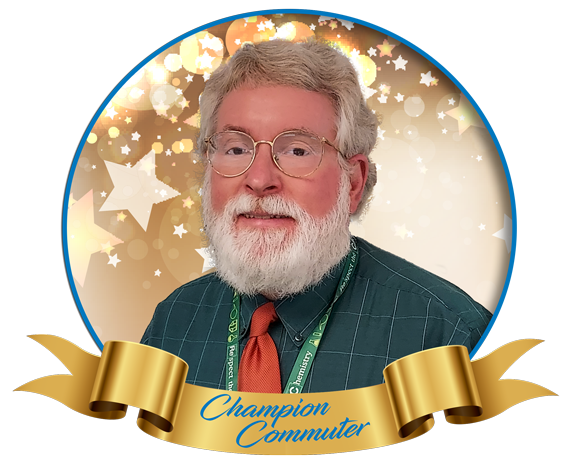 Robert Ethington is a Support Enforcement Technician for WA State DSHS – Division of Child Support. Robert is quite a dedicated commute option user! With a 9 ¼ mile commute, he runs into work each day and rides the bus home.

Robert first started riding the bus over 20 years ago. At that time, DSHS offered employees up to $2 per day for using a commute option. His supervisor, at the time, encouraged him to try riding the bus, when STA used to offer Free Ride Days. He figured he’d give it a try and then found out how easy it was and has been using public transportation ever since.

He enjoys the health benefits, his contributions to reduce traffic congestion and that he’s been able to extend the life of his 2005 Odyssey, that only has 43,000 miles on it due using a commute option to get to work each day. Since logging his trips in March 2010, Robert has saved nearly 71,000 miles off our roads and saved over $20,000 by using commute options!

Robert encourages co-workers and their clients to ride the bus. He also helps to keep their bus schedules current and available. Also, when he sees STA drivers going above and beyond the call of duty, he will contact the STA ombudsman and submit a recommendation for recognition.

ETC, Beth Morgan states, “Robert is an inspiration and models how small commute changes can help our communities and make the world a better place for all of us”.