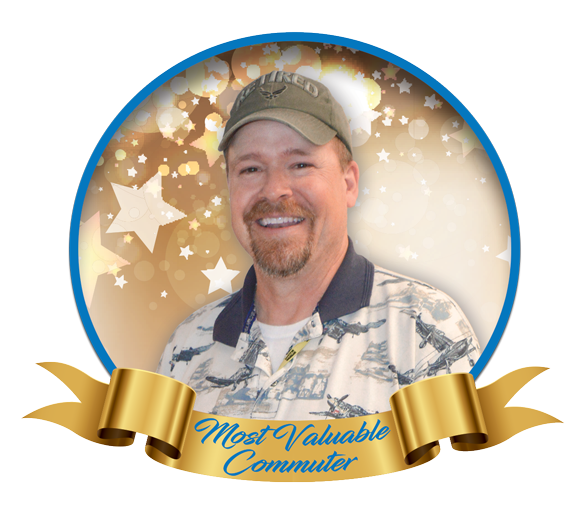 Randy Parker is the Alert Facility Programs Manager at Fairchild Air Force Base. Randy has been vanpooling to the base for nearly 5 years. With a 42 mile round-trip commute from the Indian Trail area, Randy was tired of spending his hard earned money on gas. By vanpooling to work, Randy saves over $1800 a year and uses that money for a vacation each year!

When he’s riding in the vanpool to work, he likes to close his eyes and relax or catch up on work emails on his phone. Randy says, “I love vanpooling to work! It’s a great way to save money”.

Randy is always recruiting for his vanpool and encourages his fellow co-workers and other FAFB employees to use vanpools. And in fact, will discuss the benefits of vanpooling with anyone who will listen!

Randy doesn’t have many challenges to overcome by vanpooling, but he does have to get up a little earlier and admits there are days when it’s tempting to sleep a little longer and drive by himself, but he knows his vanpool mates are counting on him! He drives from Indian Trail and meets his vanpool mates in the 9 Mile area. The biggest obstacle for him in the winter is the drive down 9 Mile hill to meet the van. Randy also keeps a spare car on base in case he has an emergency or has errands to run at lunch.

Randy’s van is a 7-passenger van, all riders being from FAFB, and it’s full, and usually with someone on the wait list. He enjoys the friendships he’s made through the years of vanpooling.

ETC, Josh Potter, says “Randy is constantly encouraging his fellow co-workers and other FAFB employees to vanpool. Randy is enthusiastic supporter of the CTR program and models what it is to be a MVC!