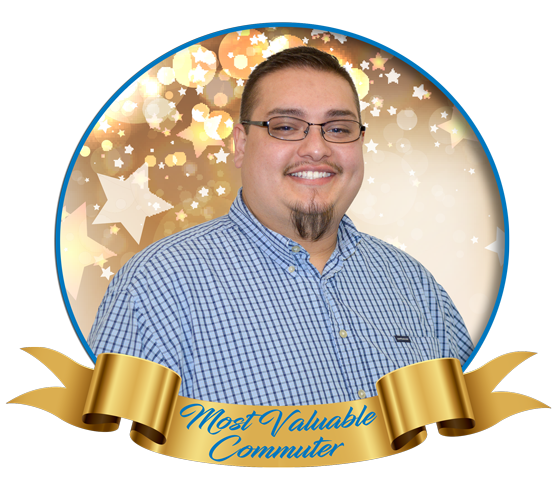 Nate Jackson is a Subject Matter Expert at Alorica. He’s been walking to work for about 4 ½ years. When he first started walking to work, his commute was about 4 miles. Since he has moved, it’s now 1 mile and takes him about 15 minutes to get to work. Not only does walking get his blood flowing, Nate also appreciates the health benefits and has lost weight.

There are times that weather makes his commute challenging, especially in the winter. He has learned though, and has sturdy, comfortable boots as well as a few different jackets to pick from depending on the weather. One thing that he notices (and loves) is when businesses clear the sidewalks and use de-icer.

At one time, Nate did have a car, but when it broke down he decided to get rid of it. When he needs to go somewhere further than a “walk a way” he uses transit or will call for a Lyft or Uber. The cost for transit, Lyft and Uber is minimal in comparison to the cost of owning a car and paying for maintenance and insurance.

What Nate loves most about walking to work are the early mornings, his time to listen to music, think and chill before work, plus he arrives with a great attitude from the exercise he gets.

Alorica’s ETC, Maureen, says “Nate is a great ambassador for our program, helping two commuters get signed up this year! Whenever he hears someone talking about carpooling or some other commute option, he tries to make sure that they are also logging their trips on their Commute Smart Northwest calendar.”