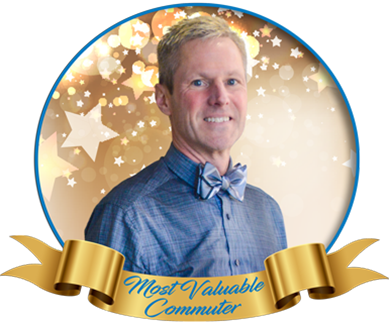 Erik Ellis is a Program Support Supervisor 2 for EWU. Erik has been riding the bus to work nearly every day for the last 31 years!

He initially participated because it reduced the number of oil changes, gas tank refills and tire replacements on his vehicle. Then his car broke down on campus and he was stranded in Cheney, 30 miles from home, which prompted him to look into riding the bus.

But 2 years ago, someone hit him in a head-on collision and he broke his neck, which has resulted in limited movement with the titanium in his neck. So, riding the bus to work each day provides Erik a stress-free commute and eliminates the fear what might happened while driving a nearly 60-mile round-trip commute each day!

Erik is absolutely passionate about riding the bus! He doesn’t feel he has any obstacles in commuting by bus and states its more of an obstacle to drive alone. He enjoys his hour in the morning and hour in the afternoon on the bus. He’s able to rest his eyes, read a book and simply not worry about traffic or weather conditions. Riding the bus each day saves Erik over $300 each month and the fact that EWU provides free bus passes using their EWU ID cards, is a bonus!

Erik’s daughter and friends are all now using the bus instead of driving their cars all the way to EWU. He taught each of them how easy it is to use their EWU ID cards and they too are avid bus riders everywhere they go.

Erik also has the opportunity to talk to people at fairs and when they come in to purchase their parking permits and asks them if riding the bus might be a better option for them.

ETC, Michelle Rasmussen says “Erik is a role model for participation is using the bus. He promotes it from the heart and experience”.