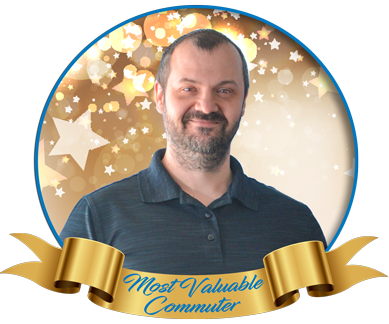 David Goodwin is a Design Drafter for Avista. He’s been riding his bike to work for the last 12 years. He rides nearly every day and throughout the entire year.

David began riding his bike when his Bronco broke down. It was going to cost over $300 to get it fixed and since he was only getting 8 miles to the gallon, David decided he’d use that money to buy a bike rather than fix the Bronco. He purchased a nice commuter bike for less than it would cost to repair his vehicle and began commuting by bicycle.

He says riding his bike is a cool way to get around. He enjoys a more laid back form of travel. It allows him to clear his head after work and he arrives at home in a relaxed mood.

Most recently, David purchased a fat-tire bike to overcome the snow and ice. He feels much safer riding that bike during the winter months. His words of wisdom are, “always assume a car wants to hit you” and drive your bike defensively.

David appreciates that Avista provides great accommodations for bike riders, including safe bicycle storage, lockers, showers and a guaranteed ride home. He tries to encourage fellow employees to ride their bike, but he says it’s a challenge, because they love their cars!

His advice for new commuters, stay off the main routes, use bike reflectors and lot of lights. His bike is equipped with bright monkey lights in the tires which shine bright. He said sometimes he gets a “thumbs up” from cars on the road saying “good job”!

Backup ETC, Amy Colvin, says “David is always willing to answer any questions from employees and will help guide their bike ride into work”.