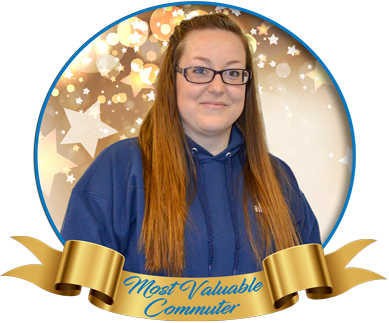 Caleigh is an On-Boarding Coordinator/Recruiting Assistant for Alorica.

Caleigh started carpooling about a year and a half ago. Living next door to a fellow employee from Alorica, that didn’t drive, and had the ability to match her schedule with Caleigh’s, it just made perfect sense to begin carpooling.

Caleigh and her carpool partner are both single moms. Every morning regardless of weather, she makes stops at 3 different daycares. Her commute would be faster if she only had her to child to drop off, but she’s more than willing to make the extra stops to ensure all the children get to their daycares and her carpool partner gets to work on time. Caleigh doesn’t see it as a challenge… it’s just their “norm” now.

In January of 2019, Maureen McElroy, who had been the ETC for Alorica Holley Mason downtown, became the ETC for the valley site, after Holley Mason closed its doors. Maureen met Caleigh within her first couple weeks. She saw that Caleigh was using the reserved carpool spaces and checked her calendar to see if she had been updating her calendar, which she had been. With no consistent marketing at the valley site in the last year, Caleigh took it upon herself to ensure her and her carpool partner’s calendars were filled out.

Caleigh encourages fellow employees to use commute alternatives to get to work. She said she’d be more than happy to add to her carpool if she found someone needing a ride within their “morning loop”.

Not only has she been one of the only long-term dedicated commute alternative users at this site, but her original carpool partner took a position with another company. Caleigh was able to find 2 new carpool partners and had them signed up on CommuteSmartNW to track their commutes.

ETC, Maureen McElroy, says “Caleigh has shown dedication and commitment to our site’s CTR program even when there was no strong promoting of the program. She is a true MVC!”