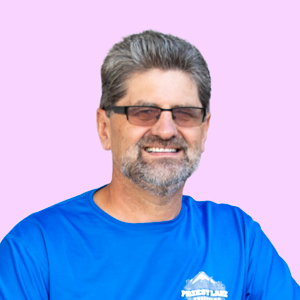 Brett overcomes obstacles to use commute alternatives by being flexible and prepared for weather, medical appointments, work meetings, etc. He always checks weather forecast the night before so he’s prepared with proper clothing for his commute or will contact a friend to carpool is the weather is too severe to bike.

Brett says his goal during the winter months is to ride when it’s not icy, and try to ride his bike at least once per month even during December – February.

Brett promotes CTR at work by challenging other employees to try commute options to see what works best for them. Other employees from WSDOT who also commute by bike, and on the same schedule, will ride together because it’s safer and much more fun. Brett likes to challenge others going up hills. He likes to inject a little competition into his commute routine.

Recently, Brett and another employee planned and held a basic bicycle maintenance brown bag lunch to encourage others to commute by bicycle or just get out on their bicycles. Brett also participates on a WSDOT committee that reviews plans for road improvement projects with bike lanes, multi-use pathways and pedestrian routes.